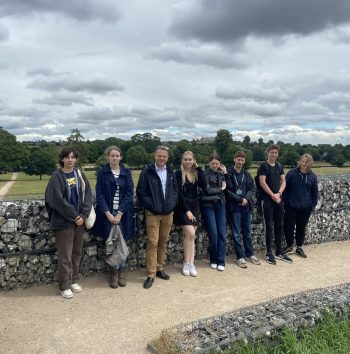 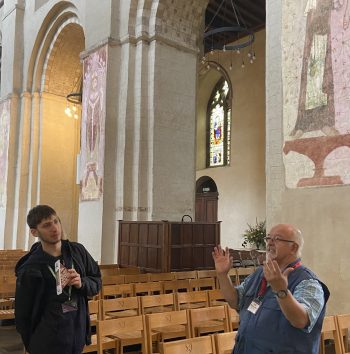 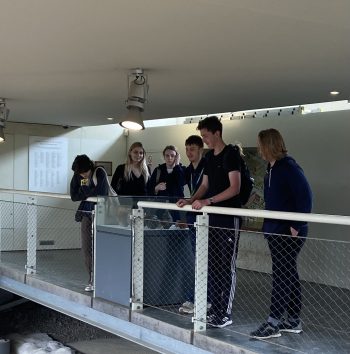 As part of trips week, the Classics and History departments led a joint discipline trip to visit St Albans Cathedral, previously the Abbey of St Albans, and the Roman ruins of Verulamium which was the city that stood here 2000 years ago. 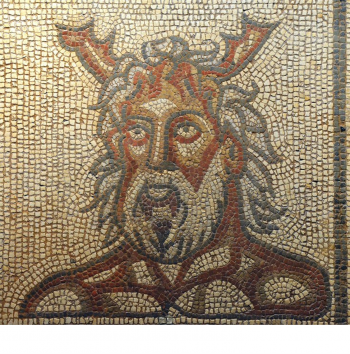 The Verulamium Museum offered an insight into the lives of the people of Verulamium, ranging from evidence of their diets and hobbies, to the pieces they used to decorate their homes. The principal ornamental piece was the mosaic. The Oceanus Mosaic for example, portrays a central image of the sea god; particularly significant to the Romans since the conquest of Britain required the submission or mastery of the perils of the English Channel.

But more surprisingly, in a Lion’s Mosaic we can observe a lotus flower in the lower section which appears on some of the earliest Buddhist and Jain imagery c 180 BC. Symbolising resilience and rebirth, this Eastern motif seems curious and out-of-place for a British-Roman mosaic. 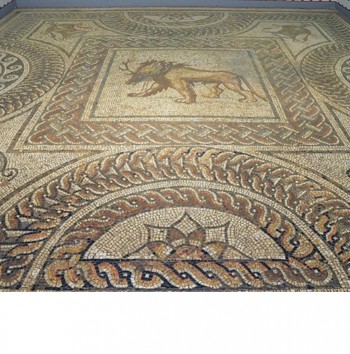 The Cathedral and Abbey of St. Albans managed to survive the reformation despite its interior decoration and structure undergoing constant change because of the suppression of Catholic religious practice by the Church of England. I was particularly interested in the niches and sculptures that managed to survive Protestant reforming zeal, they had been destroyed to establish the protestant perspective on worship, which is to focus solely on prayer, without distraction. But by uncovering of the brilliantly coloured wall paintings, we can see what the Abbey looked like to the original catholic congregation.

After the tour at medieval St. Albans, we went to look at some of the mosaics which dated from the ancient roman period, recovered either from ruins or still on site; for example the hypocaust, discovered during the excavations in Verulamium park in the 1930s dates back to 200 AD.  A mosaic depicting the sea god Oceanus is striking because it represents the Roman belief that to travel the world, one would have to conquer or subdue the god; and I found this particularly interesting as it relates to parts of Virgil’s Aeneid. Finally, the visit to the Roman theatre allowed me to see the original theatre space and imagine what it was like as when it was complete. Its ruins provided a useful structure on which to interpret how certain parts of the ancient theatre space, such as the ‘skene’ (backdrop) and the ‘theatron’ (seating) would have been placed. I could also see how it differs from larger Classical Greek theatres such  the Theatre of Dionysus in Athens.