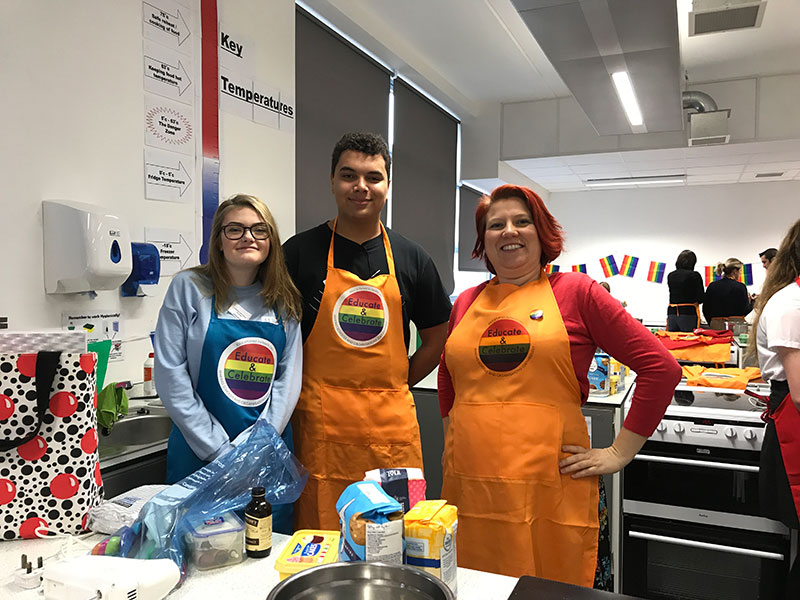 On Wednesday 21st February DLD Pride was invited to the Educate & Celebrate Bake Off Finals Event 2018, Educake & Celebake. We were invited because the cake Emily Keogh, student at DLD, made for DLD Pride’s Anti-Bullying Week Event (“Love Cake, Hate Bullying”) received enough votes online to get through to the finals. The Bake Off Final is scheduled during LGBT+ History Month, where key figures and events from the LGBT+ community are celebrated and tolerance and equality are encouraged and promoted.

The finals were held at George Mitchell School, Leyton. Six schools were in attendance from primary through to post 16 travelling from around the country. At 11:30 the competition begun, with “Ready. Steady. BAKE!” ringing in our ears, students Emily Keogh and Will Beller got mixing, rolling and baking. Tutor Jo Harland, leader of DLD Pride, sat back and ate the sweets that were supposed to be for the topping. Emily was the brains and the talent behind the cooking and Will was her willing helper.

The theme of the event was “Geography” and the slogan was “All Different, All Equal”. Emily made a spectacular sponge with butter cream filling, choosing a cerise colour for the cream as one of the judges and Educate & Celebrate founder, Dr Elly Barnes, said it was her favourite colour. The cake was wrapped in rainbow striped icing, carefully and meticulously measured out by Emily and rolled superbly by Will. Jo Harland ate the cut offs. Emily then used cutters, expertly hand-made by her friend George, shaped like the continents of the world, to create a global theme. Small red hearts were placed on each continent and paired up jelly babies surrounded the cakes. “All Different, All Equal” was then piped at the base. Emily said “Our cake showed that no matter what your race, your background, where you are from or however you choose to identify, you can love and be loved, wherever you are in the world.” 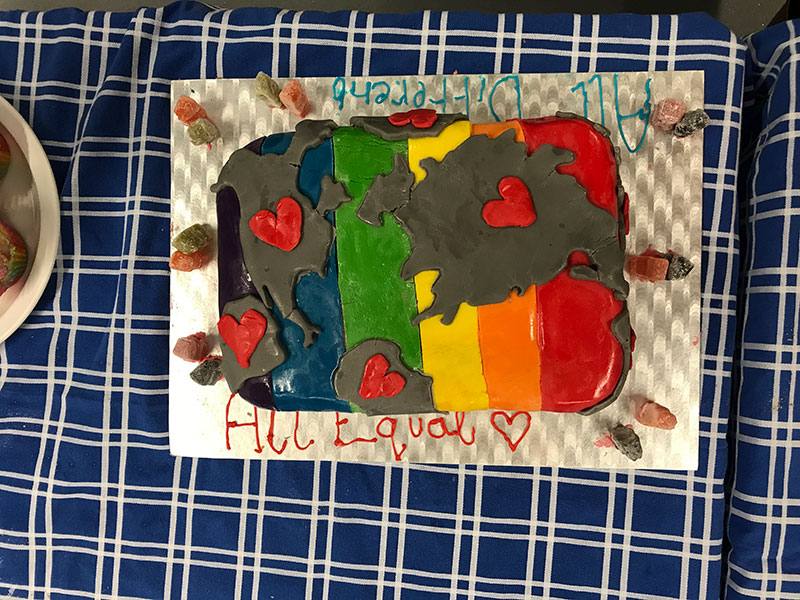 With only 3 hours of baking time the students from each school placed their cakes on the table. The competition was stiff (and creamy and chocolately and full of sugar). Will Beller said “All of the schools took a different approach, there was local celebrations with a school recreating Hadrian’s Wall and filling it with rainbow bricks, there was a cake celebrating 100 years of the women’s vote. One school had created a 3D structure of a globe”. The judges, including Scott Nunn, editor of Gay Star News, took a slice from each cake, judging on the wow factor, taste and keeping to the theme. Jo Harland is incredibly nosey and looked at one of the judges’ notes pages, he had given Emily a 9 out of 10 for taste!

Waiting for the results was tense. Everyone was tired and full of cake. The winners in the secondary school category were Wolsingham Secondary School from Durham, DLD came runners up in the Secondary category, with Will and Emily receiving some baking implements as prizes and certificates. They also got to keep their Educate and Celebrate aprons from the day. Jo Harland said “We were all exhausted by the end of the competition! Emily and Will worked excellently as a team and I am incredibly proud of them. The cake that won probably scored more on the wow factor as it had a 3D structure of a globe coming out of it and a suitcase box to sit in. This wasn’t actually made of cake though but who would begrudge Wolsingham a win? At the end of the day we all got to eat cake and celebrate, and that is more important than coming first. Emily is such a talented baker, she is always a winner in my eyes.”

DLD Pride was started in 2016 as a safe space for students to express and discuss identity issues. Since then it has grown in strength and reflects the college wide values of respect, tolerance and equality. Our links with Educate & Celebrate are one way we support students and staff who identify as LGBT+ or who are supporters of equality. Student members do not all identify as LGBT+, many students want to attend this ECA because they want to support their fellow students and help normalise discussion on LGBT+ at DLD. They also enjoy the cake. 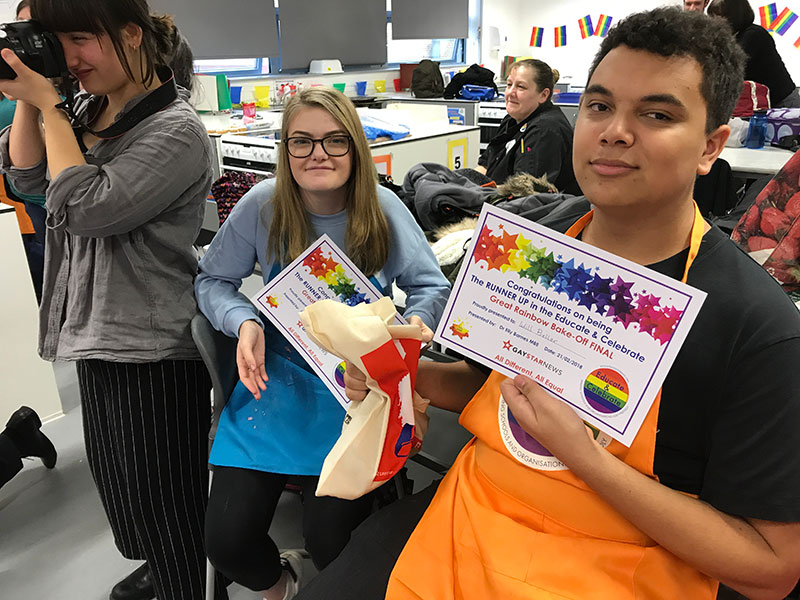