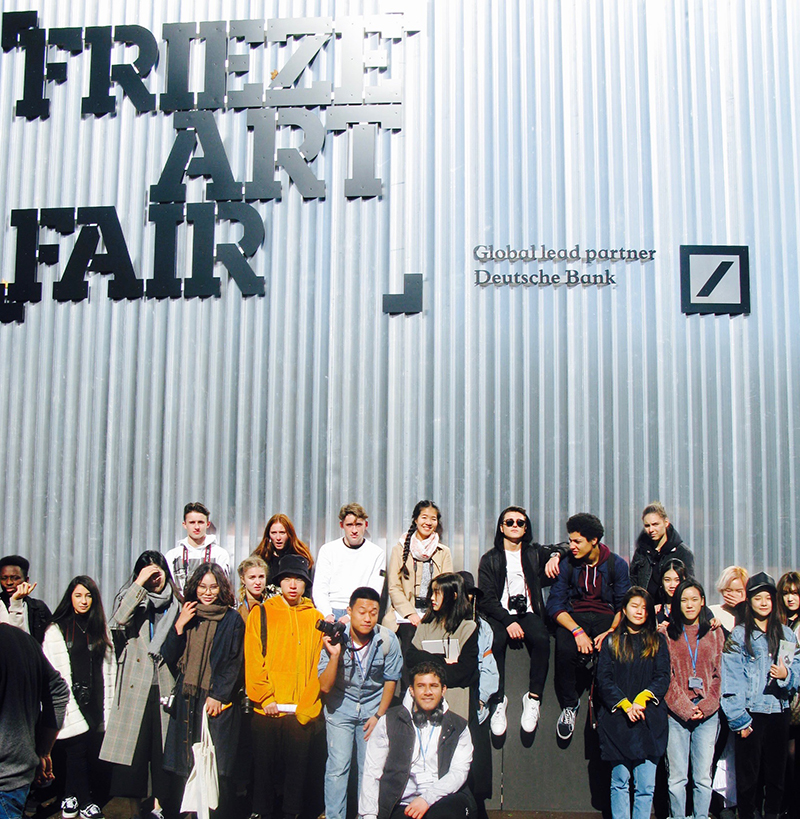 When we first enter the Frieze Art Fair, there’s a noticeable difference between the rumbling and trundling underground train of the Bakerloo line and the ever so tranquil and incongruous atmosphere experienced during our visit. First thought of mine: this is the Frieze projects – a place where art commissioners unite, under a big white tent situated out in the middle of Regent’s Park and hosting over 160 gallery booths. The facility creates a unique, yet familiar atmosphere for art students as if a contemporary Louvre has emerged in the heart of London. Let’s also not forget the quality of the artworks, it’s understandable that it requires an overbearing amount of attention, conjuring up an invisible force wall that keeps the world outside at bay and the art-goer [within] captivated.

We got a sense of the fair’s distinctiveness and somewhat quirkiness upon entering the sculptures garden, which showcased statues, installations of many sizes and media. Even the smaller fountains of the park transformed into what seemed like witches’ vats as the water turned to a glowing yellowish, Mountain Dew like colour. If you ask me, not very artsy but a very creative attempt at aiming to create the unique atmosphere and ambiance of the fair. But this was just the beginning of the incredibly extraordinary experience to come.

As we wandered around the sculptures garden we caught a glimpse of the big Frieze Art Fair board that sits triumphantly at the entrance. The sheer excitement and enthusiasm at that point transcended me; if the big white tent was incubating the artworks of our next generation, then this meant I was about to enter the origin of it all. The queue felt longer than the other queues, even those at the hot dog stall, but it only built the suspense and anticipation of the fair further.

The art fair as a whole was vast, the layout was well organised with many sections showcasing different aspects and representing various themes. For instance, section D8 – which happened to be our meeting point, showcased work related to nocturnal themes with beautifully paintings of bright and dark colours, and photographs that captured the most intricate details. Another notable feature was that some of the sections were divided because of their origins, which ranged from many cities such as New York, Paris, etc. and this added a rather political feel to the fair.

If this year’s Frieze Art Fair has given off signals as a pioneer of the art market, it’s that times are uncertain and complicated; there’s a feeling of ducking down and learning to ride the storm as time changes. As times have changed, commercial galleries have closed and understandably, confidence has been shaken. Perhaps that is playing its part in what seems to be an increased tendency for galleries to show older works rather than focusing on the new, with many sections that bring back nostalgia that is encapsulated in noir photographs and abstract paintings.

Find out more about our Art and Design courses here.