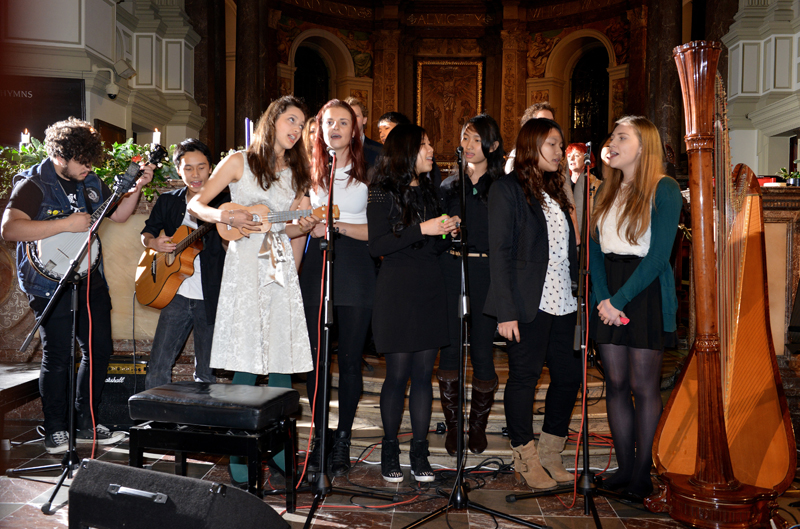 The final of DLD’s Got Talent  2013 took place in the theatre on Thursday 17th October. DLD’s latest musical talents battled it out in a live concert in the theatre.  The standard this year was much higher than it has been in previous years.

To reward the contestants’ efforts with scores out of ten we had a judging panel consisting of Alireza Kamali-Khameneh, Nikita Smelkov, Libby Moore & Charles Sibanda-Lunga.

The Results were close yet again this year due to the amount of full marks given.  I think we need some staff judges next year to be nasty Simon Cowell characters! Staff please take note and apply.

The Third Prize went toHarold Gordon-Smith, who played Coro No.1 by Villa-Lobos on classical guitar.  Harold is a truly excellent guitarist and he is at one with his instrument.  This was a beautiful and evocative performance.The Second Prize went to Melanie Harikrishna who sang Gluck’s aria:  ‘O del mio dolce ardor’.  This was another beautiful performance.  Melanie has a light and delicate soprano voice which will be well suited to the style of works by Mozart when she becomes a professional.The Joint First Prize went toMikhail Bozylev who performed his own composition,‘Renaissance Beam’ on the piano.  This was a fiery piece, played with determination and skill.  This was popular and I even had requests for it to be recorded afterwards! This prize was shared by Karolina Nevoina who sang ‘Somethings’s Gotta Hold on Me’ by Aretha Franklin.  What a strong and soulful voice she has – quite remarkable!

The following students also took part and all equally share the glory of the night:

DLD students took part in the annual switching on of the lights ceremony in Marylebone High Street.  DLD’s vocal group did themselves very proud this year and gave a very confident performance of ‘Seasons of Love’ from the musical ‘Rent’ by Jonathan Larson.  They sang very confidently in what is (literally) a really exposed situation which does not allow for dress rehearsal!  At least the weather behaved pretty well.

Eighteen music students paid a visit to Wimbledon to be inspired by Leonard Bernstein’s paradigm shifting musical ‘West Side Story‘.  This was an extraordinary production of an extraordinary piece, and one which is often quoted by music teachers when looking to illustrate musical terms.  For example, did you know that most of the music is based on the Devil’s interval (augmented fourth)?  It took me back to when I was a teenager, when I asked the seriously ailing composer if he was due to write another musical. He replied in the negative of course! I felt so silly afterwards.

Well I think I can safely pat the music students and the music department on the back and say that this was our best concert yet……. Wonderful in fact!

This was an experiment in delivering a concert as an uninterrupted performance with a connecting theme: a dramatic performance combining words and music, rather than a series of unrelated music pieces.  Since the readings came from First Word poetry and Scrooge’s redemption sequence from ‘A Christmas Carol’ by Charles Dickens, the theme was the transition from darkness to light.  I would like to develop this modus operandi further in future concerts. I am going to highlight a few performances to reflect the feedback received:

Many people were very moved by Stella Wiles Matias-Wiles performance of ‘Farewell’ -Traditional words set to a melody by Kate Rusby.  She not only sang but accompanied herself on the concert harp (a very tricky instrument to play).  The performance was consummate, and exquisitely expressed the sadness in the song.  We intend to make a high quality recording of this performance so we can cherish it.

Melanie Harikrishna, who is one of our Trinity Laban foundation students, sang: ‘Vaga luna che inargenti’ or ‘Beautiful Moon, Dappling with silver’ by Vincenzo Bellini, accompanied by the equally talented Mikhail Bozylev.  I’ve already mentioned her beautiful singing style, and again she captivated many in the audience.

Tony Zhang played ‘Winter’ from Vivaldi’s ‘Four Seasons’ on the Chinese Erhu.  This cultural fusion sums up the spirit of DLD, and his professionalism and delicate assured playing won many people’s hearts.

The following students made indispensable contributions to this high quality event:

And particular thanks go to Tien Manh Nguyen  (or as he prefers: ‘T-Man’) who over the last two years has worked so hard for the music department, and who was involved in almost every piece in this concert. Well done!

And finally thanks to my new colleague, Yiannis Christophides and his student team, for their excellent organisation and fine delivery of the sound production.