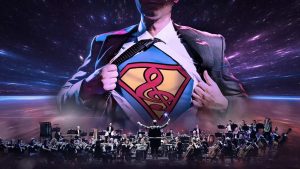 From a galaxy far, far away…

The Best of John Williams concert enjoyed by boarders at the beginning of May can only be described as an event!

Along with, Matin, Nima P, Avin, Dorsa D, Arian, Akim, Charlotte, Pavel and Irfan, we were taken on a nostalgic, thrilling and emotional journey through some of the greatest movie soundtracks of all time. Conductor, Anthony Inglis led the brilliant London Concert Orchestra in bringing arguably the greatest movie composers art to life.

Beginning with the instantly recognisable ‘ daadum, daadum’ of Jaws, we were taken to space with an incredible StarWars medley along with the uplifting E.T score, only to be brought to tears by a beautiful piece from Schindler’s List. It was entertaining to wait for the audiences ‘ah’ of recognition when a particular piece came on. Hedwigs theme from Harry Potter had all the children in the audience spellbound. There were pieces from Hook, Superman, Witches of Eastwick, Indiana Jones and Close Encounters of the Third Kind.

Not once in the 2.5 hour performance did we find ourselves glancing at watches hoping for the final bow. We left feeling like we had seen something special and began debating about what John Williams films we were now heading back to watch. If there is ever another tribute to the king of movie soundtracks, I urge you to go!