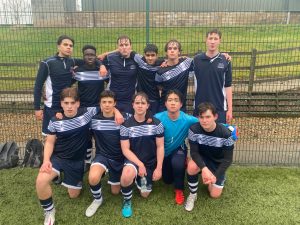 On a very drizzly, grey afternoon the team brushed off the cobwebs since their last fixture before the Christmas break to once again don the blue and white against Mill Hill. With only 11 squad members due to key players missing, and two debutees (Henry G, Y12, District and Dima D, Y11, Westminster) this was looking like it could be a tough day at the office.

As in previous matches, the boys started strongly, working as a unit with lots of good communication (vital in all areas of life). There were a few half chances from Dan B (Co-Captain, Y13, District) displaying his finest impression of a ‘throwback’ Box to Box midfielder but his final shot kept letting him down.

After 20 minutes it was still 0-0 with us just edging it. However, we were hit with a surprise when, against the run of play, we conceded a cheap goal 1-0. Felix R (Captain, Y13, Metropolitan) didn’t allow the boys heads to go down and sent out a rallying cry to say as much. The boys were not deterred and continued to try and unlock the Mill Hill defence with some fine passages of passing moves that if our natural strikers were available could have easily led to goals.

For all our good play we went into half time 2-0 down after a fine strike from Mill Hill late on in the first half. They say 2-0 is a dangerous score line and it takes the third goal to secure a tight game. We proved that to be true and with a renewed spring in our step, we made it 2-1 with a simple cross into the box which caught their defenders out and managed to reach the back post where Dima was at the right place at the right time for a simple tap in, and his first goal representing the school.

Both teams were evenly matched throughout large parts of the second half, but as the game got more physical, we started to win free kicks in dangerous areas. This led to a free kick from Henry, which I believe is still travelling through the skies of Barnet (sorry Henry). Luckily for us, Harry J (Y13, Northern) stepped up for the next free kick (after I did not let him take the previous one) to imperiously drive the ball into the top left-hand corner from some 25 yards! 2-2 game on!

Both teams scrapped and worked doggedly for the remaining 15 minutes of the match but with fatigue setting in we gave away an avoidable free kick just outside the box which led to the third and final goal for Mill Hill 3-2.

In not ideal conditions and with just 11 players I was proud of the boys performance. After previous tough score lines this was much improved, especially defensively, which I hope we can build from.