Jonathan Parkhouse, Art Teacher at DLD College London, writes about the importance of Black Art as we continue to celebrate Black History Month.

As someone brought up in a very white, English town in the West Country, my first real interaction with people of African and African Caribbean heritage was when, as a teenager, I ventured to Bristol to visit various music clubs and events, organised and run by African Caribbean Bristolians. This helped develop a love of the many forms of Black music that was being given exposure and increasingly celebrated in this country, Jazz, Folk Blues, Blues, Rhythm & Blues, and especially Ska, Reggae and Motown. Visiting a variety of multi-racial clubs, parties, shebeens and blues dances, gave me a wonderful initial experience of the special post-war social and multi-cultural developments that were emerging in this country. This was reinforced further when I went to University in Cardiff to study Fine Art, where there was another vibrant music scene, with regular live Jazz, Rhythm & Blues, and Reggae gigs and Clubs. At the Time the Fine Art Degree I took was considered cutting edge because it facilitated and promoted mixed-media, multi-media, and conceptual art, as well as the traditional Fine Art disciplines of Painting and Sculpture, something very new at the time. Another important and innovative part of the Course was the Art History element (now referred to as Contextual Studies) that taught us about important non-European Art traditions and Movements, including African, Chinese, Japanese and Indian Art, that have such an important influence on Western Art. It was in these weekly Lectures that I discovered the Benin Bronzes, masterpieces of African Art from the country that we now refer to as Nigeria. They consist of more than a thousand mostly metal brass and bronze individually carved plaques and sculptures, created from the thirteenth century onwards by the Edo people, to decorate the Royal Palace of the Kingdom of Benin (now modern-day Nigeria). The discovery of this important collection has made an important contribution to a greater appreciation of African culture and art. The Benin Empire was a hub of African civilisation (before the arrival of Europeans). Many of these important sculptures date from the thirteenth century, while another large part of the collection was created in the fifteenth and sixteenth centuries. It is believed that two “golden ages” in Benin metal workmanship occurred during the reigns of Esigie (around 1550) and Eresoyen (1735–50), when the workmanship is considered to have achieved its highest levels of skill and refinement. They were made using a technique called lost-wax casting and are considered among the very best examples of sculptures made using this technique.

It is not only the beauty and detail of these works that makes them unique and special. The combination of technique and craft alongside a unique fusion of realism, stylisation and expressiveness, is what makes these artworks, from such a specific place and culture, so timelessly and universally important. This collection of art, as well as many other examples of African art, have also played a key role in the radical and revolutionary development of Modernism in 20th Century European Art and culture. For example, you simply cannot have Cubism, or Picasso’s ‘Les Demoiselles D’Avignon’, without African Art. For me this is the definition of great Art; something that is not only beautiful, truthful and original, but also inspires and influences the Art and the culture that follows. Moving to London to continue my Art studies, I was able to see wonderful examples of African Art in the Museum of Mankind and the British Museum. I also developed friendships with young people from various African countries, particularly Nigeria, Ghana and Senegal, which resulted in a trip to Nigeria and the Benin region. Being able to see where this important and influential Art was made, and connect the people and the place with the Art that has been created, was a very special experience. This particular trip also shaped and influenced me in a variety of important creative and personal ways. Creative expression through Art is an integral part of human existence. Great Art can transform and improve us all, as individuals, as well as the community and culture we live in. And this important collection of African Art is evidence of the truth and beauty of this reality. 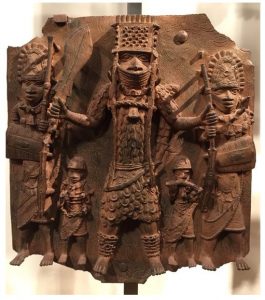 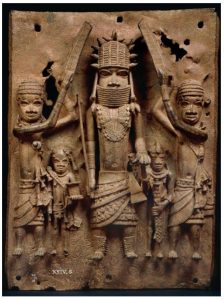